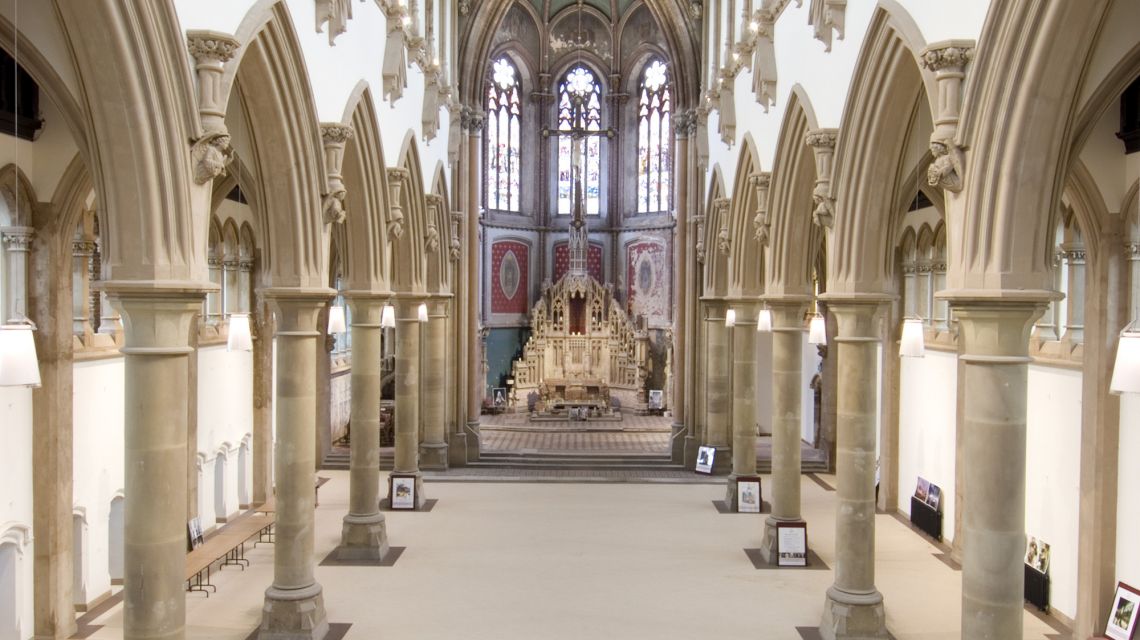 Gorton Monastery or, to give it its correct name, the Church and Friary of St Francis is a fine example of High Victorian Gothic Architecture. Designed by Edward Pugin, it was built principally by the Friary monks between 1863-1867, finished in 1872. Edward Pugin was the son of Augustus Welby Northmore Pugin, credited with promoting the Gothic revival during the Victorian period. (Hill) E Pugin was a successful architect, part of Pugin & Pugin, designing and completing over 100 churches. (Pugin Society)

The Gothic Revival replicates the earlier ‘French style’ popular during the 12th-16th Century in France (only after its decline was it referred to as the ‘Gothic style’ by way of insult). During the 16th Century it was superseded by the Renaissance style. (Wikipedia)

It was considered appropriate to celebrate the ideals and aspirations of the Roman Catholic church and key features of the Gothic style that distinguished it from the preceding Romanesque style were the tall, pointed (lancet) windows, high vaulted roofs and open, light interiors. The floor plan was cruciform, the structures were more delicate in construction with more windows located more closely together, fine tracery, and finer buttressing. The overall aim was for a lighter, brighter structure with tall spires reaching to heaven.

Although referred to as a monastery, Gorton was actually a friary. Ordained and dressing as monks, in contrast to other orders the Franciscan friars worked in the community, directly helping the poor and needy. Other orders sought the alleviation of poverty and sickness through prayer, asceticism and isolation. Gorton served the poor Irish and Italian immigrants of Manchester and provided a social hub as well as schooling for children until its closure in 1989. (Hirst)

After falling into disrepair it escaped demolition by being listed on the 100 Most Endangered Sites in the World list. Following a £6m restoration programme led by a local heritage trust, conservation experts, Hirst Conservation, were able to bring it back sensitively into use. It is now a venue for events and weddings. (The Monastery)

Gorton is Grade II* listed (English Heritage Building ID: 388148 British Listed Buildings). Built of red brick, sandstone and blue brick with steeply pitched slate roof, the design is late 12th Century Gothic with, for example, flying buttresses, lancets and (to the South front) very tall, elaborately moulded 2-light windows with geometrical tracery. (British Listed Buildings). Of particular note are the statues of 12 Franciscan saints which were removed by potential developers in 1990. The statues were only rescued from auction at Sotheby’s when spotted by a local historian and acquired by Manchester City Council. The 8 foot tall, partially gilded saints are made of French limestone and weigh ½ ton each. They are now re-installed in their original location in the Great Nave. Interestingly, the saints’ features are distorted to compensate for the fact that the statues are designed to be viewed from below. (Geograph)

Located in a deprived area just outside the very heart of Manchester, it was for much of its life surrounded by rows of terraces, corner shops and textile mills and must have seemed in many ways out of place. Many of these buildings have now gone but it remains a surprising and delightful find, well worth seeking out.