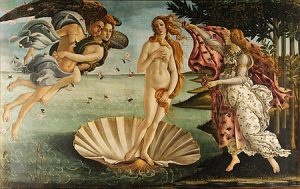 Renaissance artists very self-aware. They and humanists (eg. Valla) saw themselves as reviving the arts, rescuing it from a period of decline (p416)

However, ‘Dark Ages’ of art something of a myth, promulgated by later writers (arguably the original humanists) eg Petrarch, harking back to what they saw as more noble Classical period. (p416)

Humanists saw classical period as the standard by which all activities, inc. art, should be judged. Believed value was in intellect and prowess, not endowed by birth, nobility, chivalry. City-states identified with republic status, democracy, self-reliance, pragmaticisism. Not advocates of chivalric or contemplative attitudes (p417)

Humanism pre-emininent in intellectual history of 15th century. Humanist focus on the present not the afterlife, so some conflict with Christian and clerical standpoint. Art, however, still mostly religious, esp in Italy and N Europe. 15th century golden age of Flemish and Florentine art. (p417)

Beginnings of the Italian Renaissance

Renaissance churches not lacking in spirituality but expressed divinity through perfection and proportion of human form, harmony and equilibrium and proportion in construction/design. Man in God’s image vs spiritual/otherworldly representation of Gothic.

Beauty of proportion, maths and geometry. Minimal ornamentation. ‘The truths of the Christian religion are as self-evident as the laws of mathematics’ Manetti (p418).

Pazzi chapel. Nothing could be added or taken away – to do so would only be to make it worse. (Alberti via Vitrvius). (p418) Attributed to Brunelleschi altho’ he died before completion so may have had some influence of another designer. Based on Foundling Hospital in Florence, arguably 1st Renaissance building, style of Brunelleschi is clear and can be seen as influential in Pazzi. Hospital is clear example of blend of traditional classical architecture with contemporary renaissance appeal; long colonnade of rounded arches, Corinthian pilasters and geometrical use of space. Brunelleschi first artist/designer/architect – not trained as mason but liberal education; ‘a gentleman’ – well-travelled, took inspiration from Rome and possibly Persia.

Rationale for return to classical aesthetic also had political element. Florence identified itself with Rome and with republican, civic-state rule. Not the oligarchical rule of N Europe. Renaissance also therefore a rejection of Gothic, ‘tyrannical’ rule. (p419) Emphasis on the liberal, more civilised politics. Also recently ‘released’ from German control by death of Visconti, allowing Florence to expand. (p419)

Brunelleschi credited with developing maths-based linear perspective. Seeing scene a tho’ painting is a window through which viewer sees. Established concept of the vanishing point, orthogonals, seeing a scene from a single viewpoint. Whilst 2 paintings demonstrating this lost, principles captured in treatise by Alberti. Revolutionised art, gave it an almost scientific underpinning, imposing rational order on visible world. (p420)

A New Style in Flanders

Flemish experiental rather than theoretical. Developed new styles/techniques  by trial and error. Developed aerial perspective (graduating tones to give depth to landscapes). Flanders artists developed use of oils (sometimes in combination with tempera). Allowed greater detail painting due to much slower drying times and longer workability of oil over tempera. (p424)

Little known in Flanders literature; artists rarely written about. VE first referenced in Italian account. VE credited with invention of oil painting, and revered for realism in depiction and revival of ancient pigments (a humanist sentiment).  VE master of perspective, paintings v lifelike and luminescent; exploitation of media, translucency of oils made work intensely real. V skilled at foreshortening and perspective. Landscapes (eg. Madonna of Chancellor Rolin c1433-34) so real could almost be identified. Painting replete with subtle symbolism, any part of which could be representative; eg candlestick to represent the Virgin, flowers the attributes of the Virgin. ‘coporeal metaphors for things spiritual (Thomas Aquinas). (p425)

Scholar, artist, architect, scientist, lawyer, moralist, poet, writer and thinker. Illegitimate son of noble family but well-educated. Elevated himself through intellect and breadth of knowledge. Arguably might be accredited with creating the definition of the Renaissance Man. Treatises on architecture, sculpture, painting highly influential. Beauty based on practice of the ancients and ‘laws of nature’.

One of greatest achievements: Taking concept of walls as infill between columns and making walls spaces pierced by openings.

Donatello – revives Italian sculpture. Starts with church work, moves on to freestanding pieces. Few freestanding commissions due to construction costs so Equestrian monument to Gattamelata particularly special. Bronze-cast, figure’s perspective is cleverly distorted as to be seen from below. Horse powerful, full of energy. Lamentation over the dead Christ figures passionately real, foreshortening and perspective exquisite.

15th Century Italy, appearance of ‘medals’. A rebirth of the antique coin but not as currency, rather as tokens indicating personal renown. Often allegorical, designed as private works of art, only to be  understood by an educated elite. Intended to stimulate intellectual thought not pious devotion. Decorated on both faces with greater depth than coinage, frequently image on one face, allegorical image on reverse.

Also emergence of private art; small pieces for individual, private enjoyment. No necessary message or purpose, ‘ars gratia artis’ although in some cases, representing the purchaser or an allegorical subject. Truly 3-d; to be handled and inspected up close not admired from afar. (p434-435)

Christian and humanist realistic portrayals incorporated alongside each other albeit not truly integrated (eg: tombs with realistic figures topped with Virgin and Child/angels). Rarely busts ‘re-invented’ from Roman origins but inc shoulders and tops of arms. Most popular reliefs of Madonna and Child; in marble/bronze or cast in terracotta and glazed so within reach of poorer classes; often coloured and attached to stucco.

Italian painting and the church

Large tapestries v costly, depicting medieval, chivalric themes. Botticelli works may have been painted interpretations (albeit with mythological themes) in lieu of tapestry for less wealthy.

Astrology popular (since 12th century). Some disapproval by humanists (liked to believe man in charge of own destiny) but most (including church) accepted planetary and constellation movements as evidence of God’s intention or concealing the future/fate.  (p448)

Produced pieces heavily influenced by Greek/Roman sculpture, many examples of which in Venice.

Some Italian art in N Europe but mainly through illuminated manuscripts/books.