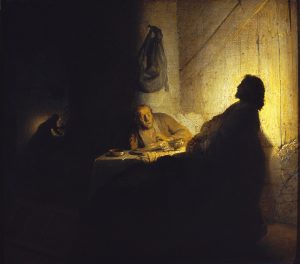 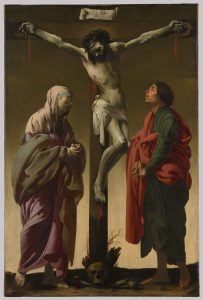 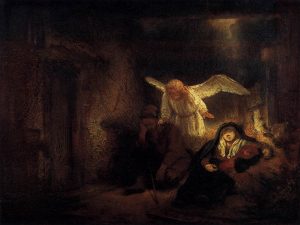 The Angel visits Joseph in the stable. A small-scale piece with gentle but powerful imagery. 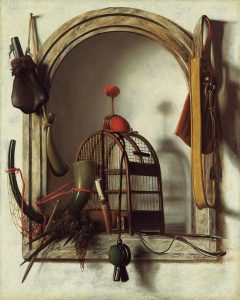 Hunting popular among Dutch aristocracy. Subject should appeal to wealthy gentry and aspiring gentry. Still lifes of this kind very popular. Trompe l’oeil effect beautifully executed to emphasise light and shade and objects carefully arranged to maximise effect. Canvas is quite large but would suit a wealthy merchant’s home or country house. 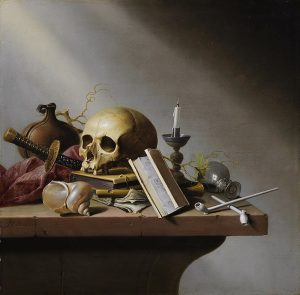 Harmen Steenwijck
Still life: An allegory of the Vanities of Human Life
1640

‘Vanitas’ from the Book of Ecclesiastes 1:2, ‘Vanity of vanities, all is vanity.’
A fine example of the very popular genre Vanitas Stilleven. Espousing religious beliefs and morality through symbology, this piece presents many of the common tropes associated with the Vanitas theme: Musical instruments for pleasures of the senses: Book for knowledge: The shell and Japanese sword, the exotic and therefore wealth: Purple silk, luxury and wealth The skull, death and the candle and watch the brevity and transient nature of life and human existence. A covert reminder to the wealthy that even wealth cannot prevent the passing of time and ultimately death. 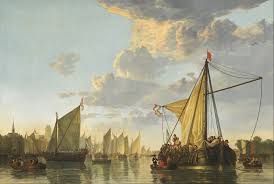 Depicts Northern provinces’ fight for independence ultimately resulting in Munster peace in 1648. Show of defiance, pride and strength so likely to be popular with newly independent Netherlanders. Scene has sense of calm despite nature of subject. Cuyp very a popular artist so would have good kudos with potential buyers. Picture has beautiful use of light and depiction of clouds. Significant size will appeal to wealthiest buyers wanting to show off wealth. 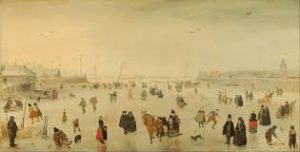 Avercamp was a popular painter of winter landscapes. Mixed groups of all social classes mingle on the ice in a hazy scene with rheumy lighting and a soft glow. This small piece would appeal to a wide range of clients as a familiar subject, painted in a style that is a contrast from the highly realistic, dark, still life/vanitas themes. 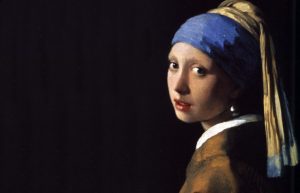 Interesting portrait (or ‘tronie’ – study of a girl’s head), may have appeal to both merchants looking for a striking, quite exotic piece. Also has religious overtone – pearl earring may refer to mystic St Francis de Sale’s Devout Life (‘women should protect their ears from unclean words, and that they should allow them to hear only chaste words – the “oriental pearls of the gospel.” Pearl earring represents chastity, while turban represents the  “oriental” element. Use of dark background keeps viewer’s attention entirely on the girl who is exquisitely lit and realistically portrayed, her expression naturalistic. Size is reasonable and would suit any home. 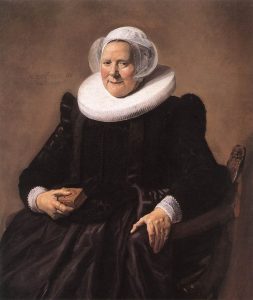 A large piece for a portrait, possibly one of a pair, commissioned by a wealthy couple. This one shows the woman, wealthy judging by the quality of her dress, modest and pious evidenced by the bible and conservative choice of clothing. Hals was a well known and respected portrait painter and this piece captures the woman’s personality with the expression, the twinkle in the eyes, the ruddy cheeks and pleasant demeanour.